Without going to deep into the Western Worldview and Greek philosophy, I feel as though I need to address and skim over Platonic influence within current western Christianity. I don’t want to give a comprehensive overview but wanted to touch on it because it definitely factors into how we see God’s governmental covenants with His creation and ultimately view salvation.

The main point that I want to address concerning Platonic thought and it’s influence on Christianity is how it affected our perception of Genesis 1:1. How you read it determines how you interpret your theology of end-times and everything in between. I have found that it makes a massive difference and has elevated Genesis 1:1 as the most important verse in the Bible from my perspective. Based on Socrates, Plato and Aristotle reshaping Genesis 1:1 in the mind and hearts of believers, I see it as ultimately leading many to a lake of fire in the end. That is why I am taking the time to address it here because I see it as directly relating to salvation or lack of it. There is no way I can fully address the concept I am getting at in this one post, but as I address other topics within the subject of salvation, hopefully some dots will connect. For example, defining what we place our faith in or what is the hope of a believer in relation to salvation?

So, simply put, Platonic thought eventually led the western mind to read the first verse of the Bible and frame it with God creating the supernatural and natural. Thus, the entire Bible becomes founded on dualistic (2 realities) thought rather than all of created order dwelling within one reality, which I call the metaphysical construct. Basically, that which is unseen has become ethereal, abstract, insubstantial, intangible, impalpable, etc and functionally uninvolved with that which is visible. During the Hellenistic era this shift took place, eventually leading “heaven” to it’s present condition in the western mind as a distant, detached and ethereal “realm.”

*Soteriological simply is a theological term for salvation 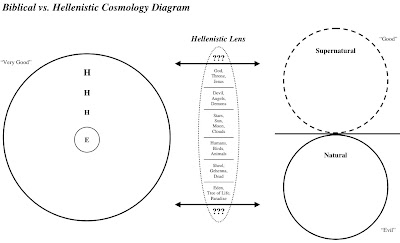 Also, God went from being the Person physically sitting upon a very real governmental throne at the height of the heavens, having real physical frame, TO some shining obscure light in the sky. And just as the heavens became the immaterial realm, the earth was described as the material/natural realm. With an obvious perception of the earth being fallen and corrupt based on prevalent sin within society, some then defined all “natural matter” as evil and eventually needing to be destroyed in the theological framework of dualistic christianity. Thus, many believers eschatology (study of end-times) shifted to escaping the corrupt earth and making it to the perfect supernatural realm (heavenly destiny). The hope of the believer, the resurrection of their physical body, was also undermined because it was part of the “natural” and thus defined “evil” as well. Believers then aimed to “shed” their physical frame/human body in order to get the “real good stuff” in the floaty cloud heavens above. I personally believe that the spirits of even deceased believers before the throne, who continually stare at the resurrected body of Jesus, long to return to the earth when Jesus comes back and receive their body back, overcoming death and embracing full salvation.

The problem with believers aiming to shed their bodies and “get outta here” is that it stripped Christianity of a tangible inheritance following Jesus’ return, sucking the wind right out of the key motivation in pursuing holiness and ultimately disarming the reality of why we endure to the end with pure hearts (which scripture talks around A LOT).  It also gave Death the victory. Without the resurrection of everyone’s body, death and satan win, leaving God the loser because He couldn’t redeem the whole person. With this theology, salvation then slowly shifted over years until it was degraded to a prayer said at an altar call, VOID OF a gospel founded on faith in God fulfilling His covenant through the returning Messiah (who will restore all things) and an enduring to the end unto salvation found in the resurrection of one’s body. As I will continue to say throughout this blog series, I see the resurrection of my body at Jesus’ coming as the guarantee that I have been saved. Until then, I cling confidently to the hope I have in Him.

The paradigm shift that happened in Christianity related to salvation was massively destructive to the key elements of a believers faith, hope and motivation in this age. God’s purpose and covenants went from restorative (restoring original earth & creation) to destructive (annihilating original earth and creation to make something new).

FROM EARTHBOUND TO HEAVENLY DESTINY

Now there are varying degrees of beliefs surrounding what I am talking about but hopefully you are catching the drift. When it comes to translations and different versions of the Bible you see the Platonic influence throughout, leaving intentional interpretations of Greek or Hebrew framed with an annihilationist (destroy) perspective. For example, instead of the earth being “laid bare” in 2 Peter 3:11 as it was with the flood, it is interpreted as being destroyed or dissolved, giving it a very different meaning to most who simply read the text. Thus, recreating theology surrounding the new heavens and earth, which shifts from God restoring creation in the end to God annihilating it and making something new.

As a result, the basic soteriological orientation (how salvation was seen) in western Christianity shifted from earthward (God eventually restoring the earth I now stand on, along with restoring the body I now live in and Him reigning here with me and all creation again as it was in the beginning), TO heavenward. With this reworked framework for salvation, death no longer was the enemy of salvation, but now it had become the means of salvation (i.e. entrance into heaven).

So, what I am getting at is that this led to the fundamental misunderstanding of salvation and the ultimate end of redemption being an etherealized Heaven. Thus, we have all heard popular sayings, such as, “If you died today, where would you spend eternity: heaven or hell?” This conclusion when it comes to salvation practically disconnects people from reality and destroys “the blessed hope” (Titus 2:13) of the Messiah’s return to restore creation and resurrection of our bodies, which was central to believers since the fall of man.

God has never given up on His original creation and makes this clear through an entire biblical vocabulary. Reconcile. Redeem. Restore. Recover. Return. Renew. Regenerate. Resurrect. The “Re” prefix suggests a return to an original condition that was ruined or lost. For example, redemption means to buy back what was formerly owned.  Reconciliation means the restoration or reestablishment of a prior friendship or unity.  Renewal means to make new again, restoring to an original state.  Resurrection means becoming physically alive again, after death.  These words emphasize that God always sees us in light of what He intended us to be, and He always seeks to restore us to that design.

There is no doubt that God’s ultimate purpose and desire has always been to dwell with man on this earth.

The crazy part about where all of this leads, is that with the rise of naturalism in our society, men started replacing “God” with in Genesis 1:1, placing themselves as the messiah by considering their perspective as the true reality…not His. Thus fallen men, like a goldfish in a dirty fishbowl, begin to try and define their fishbowl as though they are looking from the outside in. Scary!! Eventually this has led to what I would call Christonaturalism and a whole host of other theological fractures that are found in a lot of western Christianity. 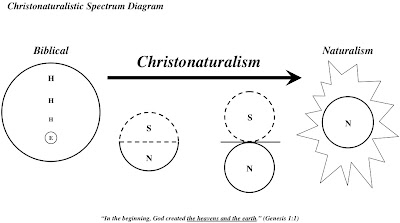 For the few readers I have, thanks for being patient as I unfold this.  It took quite a while for God to reorientate and help me somewhat grasp what His perspective has been throughout the narrative of the Word and history.  Allowing my preconceived reformed, charismatic, pentecostal backgrounds to be sifted through in order to really know the Word from His perspective and not just what my “pet theology” told me.

This site uses Akismet to reduce spam. Learn how your comment data is processed.

Want To Support Us?

WE HAVE TAX DEDUCTIBLE GIVING through The Malachi Network. You can financially support us through a recurring financial gift or one-time donation. $50 is our daily cost of living if you feel led to sponsor us for a day. For more information about partnering with us in all that we do, check out our Partner page.