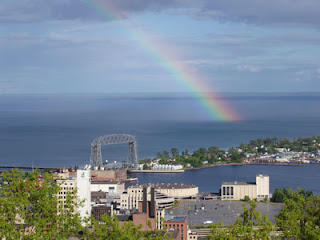 Probably most know that my family and I are moving to Duluth on March 31 but wanted to share for those who didn’t know.  Yep…in 2 weeks we move.  I just got back from my second trip of house hunting in Duluth and there are a few details getting ironed out but overall we have found housing.

I have had many ask me about our move, as well as have been surprised by the suddenness of it all.  Grace and I can relate to the surprise and suddenness as well but have no doubt it is what the Lord has for us.

Even though there was an initial shock in realizing God was moving us to Duluth, it quickly became clear that a transition like this was the perfect answer to so much prayer over the past year and half.

Anyone reading my blog over the past year and half could see the massive shift in understanding the Biblical narrative in context to the Messianic expectation, Day of the Lord and the explosion of how to live life in context to it all.  We had found that over years of ministry we had walked with a language on our lips but absence of Biblical reality in our home and lifestyle.  Reputation, recognition and pleasing of men were the deep motive of my heart, bringing language, an outer facade and barren insides.  Not to mention the fact that a messianic complex drove forward pretty much all discipleship I did, causing my identity to be grounded far more in ministry than in Him.  Because I felt the need to be everyone’s messiah based on my theological doctrine, the true Messiah became secondary most the time. “Deep” discipleship could take place early in the morning but then end the day fascinated with rotten TV programs, comfort food and a life void of the fear of God.  Relationships were built on the things of this world.  Ministry meetings and ideas were created and led by myself and others, not the Lord.

I was in love with myself and had become so deceived over time by justifying factors of my own theology.  Numbness on the inside became the norm, yet I was able to sustain enough passion for teaching, discipleship, etc based on controversy and things that would stir up my “prophetic” side, where I would then speak “hard truth” to help all I could. But mostly it was unto attention in the end when it came to the real state of my heart. What looked like fruit of the Spirit externally was really the means by which to exalt myself internally in context to jealousy, envy, etc.  The pats on the back would just encourage my own self-validating that I was really doing well with Him when I wasn’t.

The Holy Spirit wasn’t the primary leader of my life and I definitely didn’t have an ear to hear what He was saying unless it benefited my reputation in some way.  I had fought to lay out my theology in such a way where it was impenetrable to attacks or where possible “kinks in my theological armor” could be sidestepped or ignored.  My theology and doctrine had never been challenged to the point that it has been over the last 2 years, thanks to a special group of guys that I have met with weekly for years and had endless group email discussions with.  For those in that group reading this, thank you!  I’ve never been involved with a group that has had such diverse theological discussions yet do it with consistent humility and love for truth, versus love for sacred cows.  I also have to thank John Harrigan and Tim Miller who have spurred me on in such Biblically sound ways when it comes to operating as the Body should.

As I have come to grips with the depth of hypocrisy and pride I have had, there has been such a yearning to cleanse my daily life functions and begin to position our family in such a way where we can live according to the Word and not merely just talk about it.  Over these last few years Grace and I have come to really believe that the Day of the Lord is real.  The urgency of the hour we live in is pressing on us as a family day after day and we have “found ourselves wanting.”  Time and time again we have realized our desperate need to walk according to His ways and follow His Spirit boldly in order to walk worthy of the calling, enduring to His Day with right hearts.

Needless to say, this last season of life has been massive to our whole family.  Grace just said the other day that leaving Bethany is harder than when she left home for the first time.  I agree.

We came to Bethany with no children, Gracie just becoming partially blind and a heart that pursued self-interest in context to prayer, ministry and life with little to no dialogue in prayer around what the Lord was interested in.  I came to Bethany telling Him what He thought, reading the Bible a lot and listening very little.  The Word was a way by which to prop up doctrine that I had internally staked my identity in, leaving dialogue with the Lord to a minimum because I had it “figured out” in my own prideful state.  Pretty sad, but really true.

We now have such a yearning to give up our lust for stuff, live simple and learn to love rightly by the grace of His Spirit accessed in prayer.

The Lord threw me on my face weeping for a whole day back in October 2009 while on a prayer retreat by myself, reading the Word. I was blindsided by His heart to prepare children and families for the Day of the Lord and there have been several other similar moments with the Lord since then.  As well as a consistent stirring on the inside of Grace and I.  The Lord has had me wait to pursue putting together some type of “curriculum” or something concerning it all for the last year or so. There was a lot of pride and inner wickedness that the Lord had to expose and uproot in order for anything to be done by His Spirit and not by me.  He let me know it really mattered to Him where the state of my heart was at.

That leads to the transition to Duluth. In December I felt a little push from behind by the Lord to work on the family curriculum stuff and then a hard shove at the end of January.  So I began to try working on stuff and couldn’t get anything done based on current responsibilities I have.  So, about the same time, the Miller family (I have worked w/Tim Miller to help start the Daniel Training Network) said they were moving to Duluth and then asked us if we would want to go with them.

We have loved Bethany, had both our kids here, had our hearts radically changed here (more than all the years before being here combined), so we thought our roots were planted and would be here a while.  With that in mind we brought Duluth before the Lord thinking that it would be a “no.”  However, we began to have some pretty crazy things happen over the next few days from all different places in all different ways, leaving us stunned by the graciousness and love of God’s direction.  The Lord knew what we needed and made it very clear that we were to head to Duluth and begin what had been burning in us for over a year with the children’s/family stuff. As well as to live far simpler as a family.

For us, our stuff has been a stumbling block to our hearts engaging Him fully and we have known it. We don’t believe we are to live in poverty but ultimately our love for stuff matters to the Lord according to the Sermon on the Mount and other places in the Word. How our hearts deal with stuff and food says a lot about where our hearts are really at, and we have had such a desire to live simply and give generously.

On the same prayer retreat in Oct. ’09, the Lord also spoke to me that I was materially rich even though I recently resigned from my job and had very little in context to the normal American. After reading several verses on what Jesus had to say about rich people in the Word, I trembled before Him. It was a loving nudge from the Lord and mercy for our family.  I found out on that retreat and over the last several years just how jealous the Lord is for me to be with Him when He returns.

Following the clear direction the Lord had given, I tried to convince the Lord we could do what we needed here at Bethany but was then lovingly humbled by the Lord.  I realized that there are just too many things that I get distracted by here and are too comfortable in.  Not even all bad things but necessary to remove in order for the Lord to do what He wants to.  There are several things the Lord shared with me weeks ago over several days of prayer and one of many is Twitter.

We will be loading the moving truck the night of March 30th and end up in Duluth on the 31st.

This site uses Akismet to reduce spam. Learn how your comment data is processed.

Want To Support Us?

WE HAVE TAX DEDUCTIBLE GIVING through The Malachi Network. You can financially support us through a recurring financial gift or one-time donation. $50 is our daily cost of living if you feel led to sponsor us for a day. For more information about partnering with us in all that we do, check out our Partner page.